This is me with my winnings. ﻿

My friends all got in on the action ﻿ 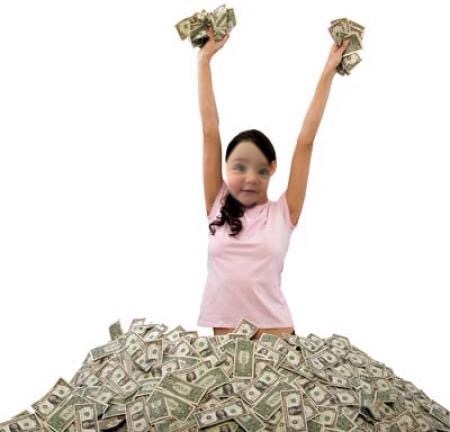 Can you tell that I’m bored? I have way to much fun on my own. Anyway, those are the worst photoshop pictures ever but I love it hahaha

Day 11 of my 30 day challenge is to write about what I’d do if I won the lottery. Would you believe me if I told you that thinking about this scenerio is one of my favourite pastimes? Yeah? Good haha because it is. I’ve thought about this so much but I’m not one of those delusional people who actually think they will win. Partly because it’s unrealistic and mostly because I don’t buy enough lottery tickets to even stand a chance. I’ve also been blessed throughout my life and I am well aware that there are people who need it way more than I want it. I’m assuming I just won 50 million minimum hahaha. Here it goes…

1. Help my family and friends.

Nobody deserves a big thank you more than them. I would certainly give my parents the most because there has never been a day in my life that they said no to anything I’ve really wanted (some call this being spoiled haha). My siblings would all get “hooked up” too. Since my brother and sister are still teenagers I would lock a large sum of their money until they were atleast 25. My older sister and her family would get a lot because they’re not only the nicest people I know but because they’re generous and wonderful. My friends would get a lot too but obviously some more than others. Some need more and some just have simply proven they deserve it for how much they’ve done for me. I don’t think I’d necessarily give them a large sum but I’d pay of all of their debt (which is basically just school debt) and buy them a car of their choice (no, not a Bentley) and then drop money in their bank accounts.

2. Help people who actually need/deserve it.

I would definitely donate to not only charities but people I actually know who need and deserve a helping hand. I can think of a few families who I personally know. I would randomly call them up and write them  a cheque. I would also reward a couple of my friends who work so hard and are actually already successful, just because they have enough doesn’t mean they shouldn’t be rewarded for their hard work!

I would certainly without a doubt travel the world. I would buy a ticket for me and whichever one of my friends who were interested to join me. All inclusive! I would tell them they didn’t need to pack. Just a smile and a positive attitude is all they need. New clothes for all! Okay, maybe not the world. But I’d def travel to a few of my favourite places. At this point I’m probably broke but this is how I prioritize hahaha.

4. Buy a house in Los Angeles.

Yes folks, I said it. That’s where I’d buy a house. I’m “that girl” haha. It isn’t just because of the glamorous life but because there really is something in the air over there. The lifestyle is so appealing to me and it could be what I imagine with that bank account I have haha. I’d obviously still want a job but a solid year would be spent just searching and exploring. Life would be so grand.

I forgot to mention this earlier but I would definitely put a large sum of my money in savings, for a future family I hope to have one day. For their education, the house we will need and for a lot of things I dream to have when I am at that stage in my life.

I don’t know what else I’d do to be honest. I’ve covered my future, my travel plans, my family/friends, the less fortunate and my house in LA Hahaha. All I am confident in is that it would probably change more people’s lives around me than my very own.  The happiness I would feel from helping or gifting others would make all the difference in my life and to me that’s actually the best reward from winning the lottery. There’s just something about laying my head down at night knowing that I could have made another person’s day.

What would you do with your lottery winnings?! Isn’t it so fun just thinking about it haha. xx